In the course of the extension of the Sachsenmagistrale Leipzig - Hof, GRE German Rail Engineering has been commissioned with the planning services for various sections, including the section in Altenburg. In addition to final state design, the construction process and the resulting operational restrictions are playing an increasingly decisive role in today's complex rail traffic.
Due to various tight constraints in the planning around the Altenburg section, GRE Dresden's experts worked out the proposal to construct an interim rail bypass by means of two auxiliary bridges, an interim platform and an alignment during construction. This solution offered the three decisive advantages:

The advantages of this solution were also recognized by DB Netz AG, which is why this approach will now also be used for future projects. Thus, an interim rail bypass will also be set up for the reconstruction of the stations Gößnitz, Zwickau and Dresden-Altstadt. 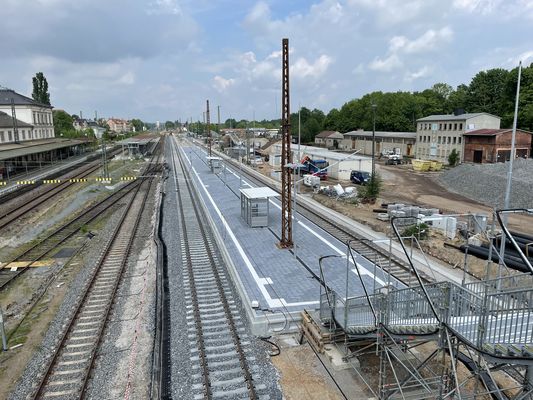